The formation of #biogas is a natural phenomenon that naturally occurs in wetland, manure stacks, and indeed in human and animal intestines. For centuries, humans have harvested the power of bacteriological digestion, by recovering naturally formed biogas to use for lighting, cooking, heating or to power mechanical engines. In the twentieth century, the process went out of favour while cheap fossil fuels were available. However, in the last 15 years, the process has seen a renaissance. In Asia, millions of family digesters are in use to provide cooking fuel and lighting in rural areas. During the second world war, German army trucks were fueled with biogas collected from farmers manure. Hence, the name “gas engines”.

The word ‘anaerobic’ means oxygen deficient. #Anaerobic digestion (AD) is the microbial degradation of organic material known as ‘feedstock’ (such as farm waste, food waste and energy crops) to produce biogas. This process is sometimes referred to as ‘bio methanation’. Typically, anaerobic digestion takes place in sealed, insulated tanks (digesters) in the absence of oxygen. It requires a heat source and is either a mesophilic process at temperatures of 35 to 40°c or a thermophilic process at 50 to 60°c.

Farms and ranches are common places where anaerobic digestion can make sense. That’s because these are places where there are typically large quantities of organic material available. Well, run digesters effectively eliminate the environmental hazards of dairy farms and other animal feedlots. The environmental reasons typically motivate farmers to install an AD plant more often than the digester’s electrical or thermal energy generation potential does. Other potential common uses are in zoo waste management or any facility located near a continuous source of biomass such as a contained animal feeding operation.

We made a video of the most important part of this article. You can watch it below (we apologise as the sound quality is not perfect):

“Fixed Film” May Be the Future for Anaerobic Digesters

Scientists have for a long while been experimenting with a new method to improve the process in the future. It is possible that soon a “fixed film” digester may be available. In this type of system, a digester is filled with a medium such as rocks or plastic mesh. The medium acts as a resting and growing place for the bacteria. Many bacteria, instead of being flushed out with the effluent, would remain attached to the medium inside the digester. By retaining the bacteria within the fixed film digester, bacteria would be held inside the reactor to consume more organic matter per unit volume than in standard digesters.

Primary Objective of Some Recent US Research 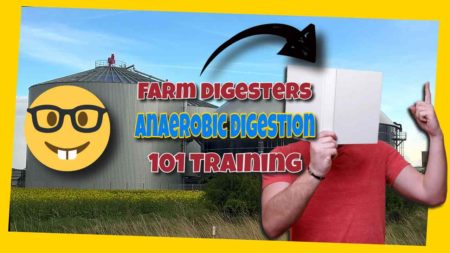 The primary objective of some recent research was to determine the technical requirements and economic feasibility of producing methane gas by anaerobic digestion of dairy-cow manure https://anaerobic-digestion.com/. A review of the literature revealed a substantial amount of laboratory experience with methane digestion using farm wastes, mainly dairy manure. However, information on experiences with full-scale digesters in operation on commercial-size farms in the United States was rare. As a consequence, it has been decided that the US government will provide funding to build a digester of sufficient size to study the engineering problems related to the use of digesters on dairy farms.

Who is Vanguard Renewables?

With an average herd size of 113 mature cows, Cayuga county is home to 280 dairy farms and 31,500 dairy milking cows producing approximately 855 million gallons of milk per year. The Cayuga dairy industry is a major contributor to the county’s economy, employing nearly 1200 people while generating $140,000,000 of revenue from the sale of milk alone. At the same time, the Cayuga county dairy industry also produces.

Biogas consists mostly of methane (ch4, around 65-70%) carbon dioxide (co2, around 25-30%) and varying quantities of water (h2o) and hydrogen sulphide (h2s) and some trace amounts of other compounds, which can be found, especially in waste dump biogas (e. G. Ammonia, nh3, hydrogen h2, nitrogen n2, and carbon monoxide, co). The amount of each gas in the mixture depends on many factors such as the type of digester and the kind of organic matter.

Use of the Digester Effluent

M. B. Kahn is currently completing the $22m upgrade on two of the five anaerobic digesters at the City of Columbia metropolitan wastewater treatment facility. Key modifications to the yard piping were completed to convey co-thickened primary and waste activated sludges from the existing trains one and two. Dissolved air flotation buildings to each anaerobic digester were constructed. Existing equipment, piping, valves, and appurtenances from existing digester head houses were demolished and replaced.

For the small home digester, it’s good to paint any clear plastic walls in black so that the temperature keeps steady and for light not to go in, to not encourage the growth of algae. Algae produce oxygen which is not beneficial for anaerobic bacteria. We put a layer of gravel on the bottom of the tank in order to act as a growing place for bacteria (more surface area) and not to be flushed out with the effluent.

Before 2002, fewer than five dairies in California operated anaerobic manure digesters. Each dairy used the biogas produced by the digester to run an engine that powered a generator producing electricity for use at the dairy. There were no specific regulatory programs that applied to the digesters, although the regional water boards (RWBS) regulated wastes produced at the dairies, including effluent from the digesters.

For future energy security and improvement in the use of natural resources, the depletion of conventional energy resources such as fossil fuel can be solved by the use of renewable energy sources. In the midst of numerous renewable energy sources and their production means is the sustainable generation of biogas through anaerobic digestion technology. Anaerobic digestion is a microbial process whereby organic carbon is converted by subsequent oxidation and reductions to its most oxidized state (CO2) and reduced form (CH4).